skip to main | skip to sidebar
My Journalism Professor Made Me Do It.

Review coming soon via Allston Pudding. In the meantime, check out my preview to familiarize yourself with these crazy people at AP here.
Posted by Carolyn at 3:00 PM No comments:

Sometimes I sit with my friend Shane up in the lighting booth. Don't get me wrong -- there's nothing like being forced within a crowd whose pressure lifts you in and up on all directions. It gives you a sort of panic that is shared by almost everyone in the pit, and thus a shared heightened emotional experience as you all witness whoever you're watching. But sometimes I like to watch from afar.

Anthony Green has had the words "sex god" printed next to his name more frequently than I'd like to see. He is a beautiful man, but he was not sexy up on that stage. And thank God! Whether he takes that sexy status to heart is anyone's guess, but if he does he plays it off well.

Anthony was more of a giant FLIRT, if anything. He loves to flirt with the crowd thanks to his Minus the Bear-esque distortions, 80s mega guitar solos and more crowd participation requestions than I could count.

An abrupt, lazy but overwhelming ending to his set (which was, by anyone's standards, nothing too spectacular) was followed by the average "WHAT THE FUCK?" chant to snag this sucker back on stage.

Basically, the show was a whole lot of charmful self-deprication ("Yeah, I know you guys don't want to hear this shit -- you just want to hear Saosin") and muted talent. And then the grand finale.

And oh, was it grand.

If I ever see this pulled off at a concert, I'll be beside myself. Anthony divides the pit into two sides: one with one line ("This feels like a nightmare") and the other with the callback ("We're all in the same spot") for Devil's Song. Yes, I know this happens all the time at shows. But check out the song off Avalon. There's a vocal overlap of sincopation and harmony that two people would take a bit of time to figure out. But this crowd just sort of made it happen.

Keep in mind: here I am, sitting on the balcony in the lighting booth. I felt powerful, as if I could conduct these teenagers into feeling the desperation/empathetic dinamic with which Anthony Green sings. Two separate sides of a single feeling: one where you'd like to kill yourself, the other where you feel grateful for the love you share.

To be honest, it's an average overlap on record. But hanging over the crowd that night was an air of bonfire bonding. Anthony probably feels this every show, but he definitely felt it this night, swaying his body as he directs the cues for either side. It's enough to make you call him sexy, that's for sure.
Posted by Carolyn at 2:45 PM No comments:

Check out my review of the winter folk over at Allston Pudding! Click here.
Posted by Carolyn at 2:43 PM No comments:

While you wait, check out some photos of the tour that I took here.
Posted by Carolyn at 8:53 AM No comments:

Sometimes when you go to a show, you don't want to worry about catching every detail and writing every observation to memory. Sometimes, you just want a beer.

So in my buzzed state at the show, here is what I recorded about Rival Schools:

Poor guy [vocalist Walter Schreifels]; He not only leads the way with chord and riff progressions, as well as stage presence and composure, but his bassist [Cache Tolman] couldn't even keep up with his shifts. I mean, how many singers of a four-piece do you know lead in guitar solos? He's carrying the band, and let's give thanks to that.

Side note to bassists: a five-string bass will not conceal your musical inabilities. A five-string bass is essentially a testosterone-steroid-juiced guitar, and it doesn't impress the ladies. So if you can't make use of your instrument (and by instrument, I mean bass) and you're playing two-tone choruses with just a different two-tone backdrop in the verses, you're essentially playing a deeper guitar that adds nothing to the band. Sorry I'm not sorry for that revelation.

[Moving on from the bassist rant:]

In terms of setlist, two biggest singles played smack in the middle of the set takes me back to the London office. Live tuning just before a song is like an orchestra pit's soundcheck -- it always get's me amped for the next song. And by the end of the set the drummer is playing these breakdown on snares so huge that I don't even want to pause to note it on my notepad; it has everybody's eyes glazed over and locked on stage, the chemical reactions in their brain churning in sync because the song has so much force it carries you with it.

So, if that didn't make any sense to you, here's a sober version of that analysis:

The set was long and sweet; major singles were played towards the beginning while the end was saved for the ranting musicianship that Rival Schools can only show off on a live stage. Typical of shows at Great Scott, the band was a bit out-of-sync with each other, and the most red-handed culprit was the bassist. 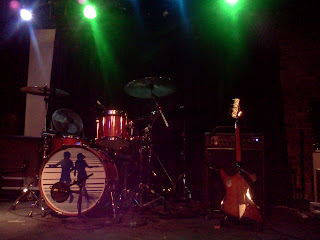 He was two-tone for nearly the entirety of the set, and I may or may not have been seeing double but if he was playing a five-string bass it didn't help his cause. Regardless, Rival Schools pulled through thanks to their frontman, and it's a show worth seeing especially for fans who can fill in the missing musical gaps with their memory of already-familiar songs.

Hostage Calm are always fun to see, as long as you're there for energy and not precision. 'Donna Lee' got everyone to shut up, and Chris did the vocalize-support service in favor of gay rights. It's about marrying who you love, not about marrying who the state tells you you should, as he says.
Posted by Carolyn at 12:36 PM No comments:

TRANSIT with I AM THE AVALANCHE, BAYSIDE & SAVES THE DAY - 10.9 @ Royale, Boston

Continuing the concert-buddy trend, Sam and I booked it last minute to Royale to try and catch Transit at the earliest time ever (5:30 p.m.). Obviously they opened with "Long Lost Friends," I track I have listened to about 45-thousand times and still can't get enough of.

I'm not gonna lie: I hear that Transit sucked live, so I was a bit tense when they first came out. Part of what makes their album Listen & Forgive so awesome is its production (who the hell produced it? Someone over at Rise set them up big time -- someone help me out here). A lot of people are crediting Transit's maturity in musicianship to Torre Cioffi, who replaced Joe Lacy on guitar as of this year. But whoever produced this album really embraced touches of guitar distortions that really make the album.

And thank God, Transit pulled it off brilliantly live. Singer Joe Boynton is notorious for sucking live. He 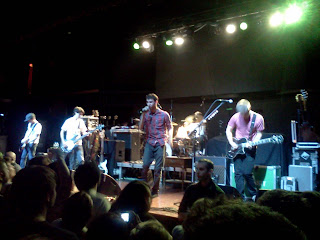 definitely has to work on his pitch, but his strength is there. Ever more, his stage presence is unreal. If this kid has never taken theatre before, he better get on that shit. He's intense, he's pissed at the girls he sings about, it's almost as if he's pleading to the gods when he belts out. Yeah, it's a bit melodramatic. But it makes the guy irreplaceable.

We didn't really think we'd stay for everyone else, but why not? I Am the Avalanche are actually hilarious at how pissed off they are, obviously gearing towards the teenage-angst crowd. Having never really listened to the band before, IATA preambled their songs with intros like "This song's called 'Fuck You'" and "This is about my second restraining order!." 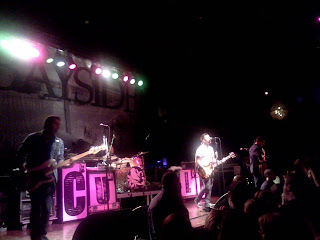 
of course take the cake with Anthony Raneri's vocals. He definitely compares to the late Alexisonfire's Dallas Green with strength and boldness (sounds like a coffee). Saves the Day are kind of hilarious in terms of how many late-20-year-old were totally into Chris Conley's elmo vox.

I don't mean to be a hater, but we came for Transit and got what we wanted. Everyone else was just icing on the cake. Not the most delicious icing at times, but icing none the less.
Posted by Carolyn at 6:07 AM No comments:

Labels: Bayside, I Am The Avalanche, Saves The Day, Transit

Before I explain anything about this show, I need to explain how we (my friend Sam and I) actually ended up at a dirty pub, the only females at the bar, at one in the morning on a Sunday night.

Because we are typical college students (21, so there is no shame), the two of us raged Saturday night. On our way to get some late-night pizza, we see some dudes hopping out of a creepy-ass child-abductor van with a trailer attached to the back. Naturally, I got excited and called them out for being in a band, which, through further interrogation, they explained was called Zlam Dunk and described it as a "punk dance" ensemble (that's a new one).

Think of the exact midway between CSTVT (formerly Castevet) and D.Z. Deathrays.

Anyway, we told them we'd be at their show the next night. Not surprisingly, they didn't believe us. We show up around 8, as the pub's website said that the show would start at that time. But no, Zlam Dunk don't even go on until 11. In my panic with all of my homework assignments running through my mind, I ask Sam what we should do. We couldn't leave -- the guys in the band had already seen us and were impressed that we actually showed. So Sam's solution?

"I think we're gonna have to rage through this one."

With HotChaCha opening, a bare-all blonde chick from Eastern Europe pounds out a punktastic garage band set. Shortly after, Summer People did basically the same -- though I'll be honest, without nearly as much heart.

Let me tell you. If your audience consists of about 10 people INCLUDING the other bands you're on tour with, you better play your fucking heart out. Because if you can't do it for 10, you won't make it to do it for 10,000. Ever.

Anyway, Zlam Dunk pretty much blew my mind. Maybe it was because I had no expectations about the show. Maybe it was because they literally blew out my ear drums. Or maybe it was just the beer. But there are certain chord progressions that make your heart sink because they're so sad and beautiful, and when they're played on top of the puntastic-garage-band-finesse that I was talking about earlier, the sounds creates a power that takes a hold of you (again, it could have just been the beer).

As the 5 guys crammed on a tiny stage framed by Christmas lights, their bassist strummed 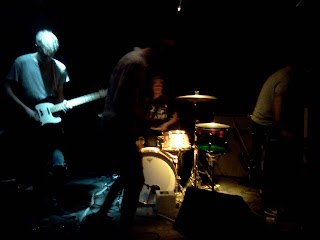 chords with a pick, their lead singer had crazylegs as he slammed himself against the stage and pounded a tambourine against the overhead speakers, they screamed over some insane kind of music that might not be considered "dance punk" but I'm at a loss for words of what genre it could have been otherwise.

Fast sets, empty venues, beer and chill bands who find humor in the fact that they're playing to anything but a sold-out show. Without any expectations and without a gameplan, that's all that makes for a kickass night.
Posted by Carolyn at 7:31 AM No comments: